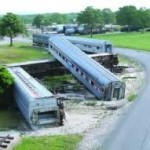 Canceling a planned high-speed rail line will cost Wisconsin taxpayers nearly $100 million and more than 400 jobs in the near future, Gov. Jim Doyle said. Doyle’s figures include not only money already spent and workers already hired, but also jobs not yet created and state money needed to replace federal funds for upgrades to existing train service. U.S. Transportation Secretary Ray LaHood flatly rejected Governor-elect Scott Walker’s claim that the $810 million in federal stimulus money allocated for the Milwaukee-to-Madison route could be shifted to state roads, saying the federal government will pull back all of that cash and send it to other states for their own high-speed train projects.

View Letter from 1000 Friends of Wisconsin to State Legislators