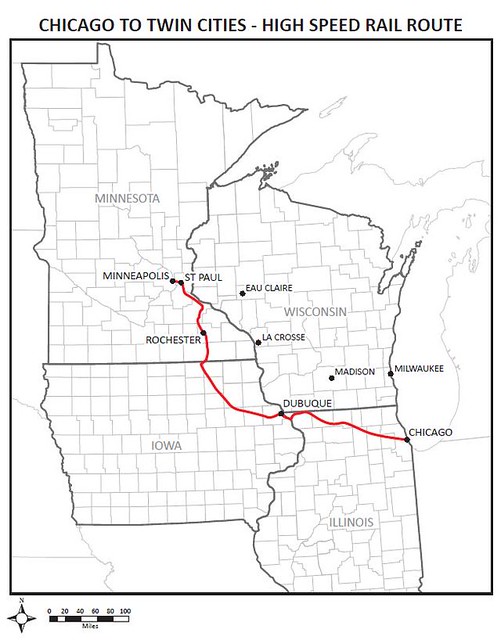 If a picture says a thousand words, then a good map can say a million. So check out the map below.

One thing that’s been lost in the high speed rail debate so far is that the Milwaukee to Madison line is really just one stretch on the bigger Midwest High Speed Rail Network. The northwest part of that network would link Chicago to the Twin Cities. And if it doesn’t come through Wisconsin, it could very well go through Illinois and Iowa.

This map shows how that might look. Just as the Interstate System created winning and losing communities a generation ago (remember those stories of once thriving towns left virtually abandoned once traffic moved from them to the big new highways), the states served by high speed rail will be literally connected to prosperity. Those left off the map will be off the economic development grid.

To underscore this point, the Department of Transportation is conducting hearings on proposed routes through Wisconsin. The first is tonight in La Crosse. There will also be hearings on December 1 in Eau Claire, December 2 in Fond du Lac and December 7 in Madison.

What had been planned months ago as a relatively technical discussion of various route alternatives has become a vitally important opportunity to send a message to the new state administration that Wisconsin communities would benefit from high speed rail.