The County of Racine has created a Transportation Task Force to deal with issues of mobility in the region, with a focus on the new Foxconn factory. The task force met for the first time last week and discussed ways to improve economic vitality in Racine by investing in transportation. Unfortunately the discussions appear to have been centered around obsolete ways of approaching transportation–for example, this quote from Caledonia Village President Jim Dobbs “Everybody has all kinds of expressways that dump them right into or right around their city and for too long Racine has been left out of that.” Dobbs suggested a “spur” that would go from I-94 east to the lakefront, which would likely cost millions in additional funding from the DOT.” 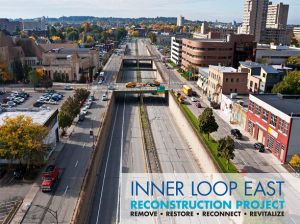 It is incredibly misguided—expressways that went through cities have destroyed downtowns, obliterating street life and rendering valuable land useless. It’s absurd to think that spending millions of dollars to shave just 6 minutes off someone’s commute is a good idea. Cities today are realizing that these 1960’s era downtown highways were dragging them down an economic and social hole, and are striving to remove them. Rochester, NY recently completed work on removing the Inner Loop, an inner-city freeway that had been characterized as a “noose around downtown”. Here’s a good article that talks about the project and the benefits that have come after the highway has been removed.

Instead of miring the city in years of construction that will destroy neighborhoods and reduce its vitality, they should instead be promoting high speed, reliable transit that prioritizes the movement of people, not cars.