Proposal to hike taxes and fees takes heat from both conservatives and environmentalists.

-by Mike Ivey, The Cap Times

“This (DOT proposal) is nothing more than a road builders manifesto” says Steve Hiniker, executive director of the smart growth land use organization. “It does everything they want at the expense of everybody else.”

“Our government should be doing the exact opposite, encouraging people to burn less fossil fuel,” says Vincent, who, with his wife Patty McCormick, own a hybrid Toyota Prius that clocks nearly 55 miles per gallon.

In a state that has long depended on fuel taxes and registration fees to cover 90 percent of its transportation budget, the old model is no longer working. A combination of the growing popularity of high-mileage vehicles, fewer miles being traveled and politicians leery of any tax hikes has Wisconsin at a transportation crossroads. 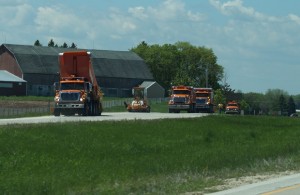 Last month, the Wisconsin Department of Transportation came out with its solution: a plan to raise fees and taxes by more than $750 million over two years.

The plan includes a new way to tax gasoline, tying part of the tax to wholesale prices, plus an extra 2.5 percent tax on all new vehicle purchases and a $50 annual charge for owners of electric or hybrid cars. It also includes higher taxes on diesel fuel, an acknowledgement that trucks put a lot more wear and tear on the road than cars.

Without those changes, the DOT would face a roughly $680 million budget shortfall it says would push back scheduled road projects and affect funding for everything from snowplowing to the State Patrol.

Read the full article at The Cap Times.