For our very last placemaking recommendation for the impending redesign of the 700 and 800 blocks of State Street and UW’s Library Mall (and we think we have saved the most important one for last), we strongly encourage the City of Madison and the UW-Madison to work together to create a programming coordinator position for this keystone public space. With a single point of contact whose job is to orchestrate events, juggle complementary and competing activities and infrastructure needs, and ensure that the space offers activities that have something for everyone, a public space can go from being a place where people are to a place where people create community. 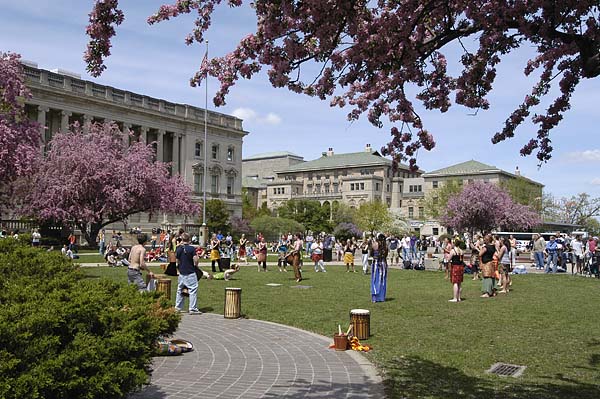 Such a position would serve the purposes of coordinating the “social landscape” activities of the completed project and synthesizing the different regulations, missions, interests, et cetera of the organizations with jurisdiction over the uses of the space. The ultimate success of the Placemaking aspects of the State Street 700 & 800 Block & Library Mall project depends upon the inclusion of a long-term programming staff position as part of the redevelopment project. The staff person’s responsibilities should specifically include the coordination of the maintenance of the space, responsiveness to users, music, art, community events, and educational, etc. activities in the redeveloped space.

Spaces and projects at the cutting edge of placemaking have taken the idea of programming seriously, and the results speak for themselves. Take, for example, the UW-Madison’s Wisconsin Institutes for Discovery (pictured here). WID’s unique mission combines cutting-edge scientific research with a true dedication to public openness and accessibility. In addition to a design concept that promoted public accessibility and placemaking from the get-go, having a programming coordinator for WID helps the university and the nonprofit Morgridge Institute run it as a sort of science-based community center for the whole city and region. The transparency between the public and the research going on upstairs furthers the sense of public investment in the space. 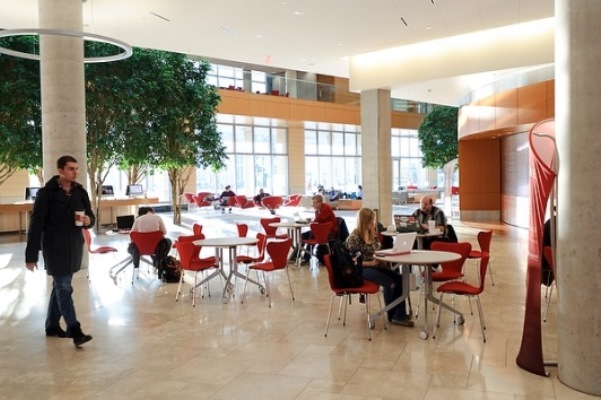 Another local example of a public space that has embraced coordinated programming as the key to achieving excellence is Madison’s new Central Library (pictured below). Envisioned as more than just a place for books and research, the library has a dedicated programming person and flexible community space that will host DIY workshops, storytelling nights, and musical performances, to name just a few uses. The old library even opened up for a late-night party, called “Bookless,” that took place after the books had been moved but before demolition. This event helped build excitement for the new facility among young professionals and college students, a creative and growing population that the library rightly sees as critical to its future success.

The consultant team and city committee have expressed support for a programming position, and we are very encouraged by this. However, we will continue to advocate for this so it doesn’t go by the wayside or get lost in the shuffle of the broader redevelopment of the East Campus Mall and Library Mall. Without good programming, placemaking runs the risk of just being a redesign of the physical space without enough attention paid to making people feel welcome and giving them a stake in a place.

The State Street and Library Malls are a vital public space in Madison. The changes made now, both physical and organizational, will likely be with us for decades. Rather than frighten us into timidity or indecision, this opportunity should give us reason to work as hard as we can to make sure this treasured public place serves the community at the highest level well into the future.