Active Wisconsin, a program of 1000 Friends of WI, published a press release this week promoting alternatives to driving as way to reduce the hurt caused by high gas prices.

Madison – Prices at the gas pump are high, but traveling by bike for short trips might provide relief for many Wisconsinites, say advocates from around the state.

“As gas prices rise to historic levels, now is a good time to review our travel patterns and behaviors,” said Gregg May, Transportation Policy Director at 1000 Friends of Wisconsin.

Around 35% of all trips in America are just two miles or less in length, according to the Federal Highway Administration

“Trips of this distance can often be achieved by walking or biking,” says May. “We encourage Wisconsinites to reconsider using their car for a short trip or two. Not only will replacing one or more trips a week help your wallet and your health, but it will also help the climate.”

Michelle Bachaus, Community Engagement Manager at Wisconsin Bike Federation, offers tips for replacing a few short car trips with bike commutes. “Start with one trip per week by bike instead of by car. Think about how you can get there by bike, not about the route you typically go by car.”

“If you are commuting or taking the kids to school, practice your route on a weekend, so you know how long it will take you,” suggests Bachaus.” Since “conversational pace on a bike is 8-12 miles per hour,” it takes about 10-15 minutes to pedal 2 miles. Many destinations in cities are within that 15 minute trip time.

Tim Staton of the Cargo Bike Shop in Madison agrees, suggesting ways to start slow. “Bike commuting doesn’t have to be an all-or-nothing thing,” says Staton. “Find those trips you make by car that are easy to make by bike and tackle those first. Something is better than nothing and as you gain confidence and comfort you can switch more trips from car to bike.”

It’s not necessary to buy a lot of expensive gear or clothing, either, especially if you are just getting started. Staton says, “If you have clothing that you can wear while being active outdoors in the same weather you will be riding in, you more than likely have the clothing you need.” However, if bike commuting or longer rides become a regular part of your routine, you may eventually want to invest in a good rear rack and panniers (also known as saddlebags). Says Staton, “Your back will thank you!”

Mathew Christen, owner of Wrench & Roll Collective in La Crosse, offers several mechanical tips for new riders. First, get a bike shop to help adjust the saddle and handlebars on any new or used bike to make sure it fits. Staton of The Cargo Bike Shop agrees, noting “Consider your position on the bike as well as how the contact points (grips, seat, and pedals) interface with your body. Ideally, you should be able to jump on your bike in “normal” clothes and do many of your trips by bike pain-free.”

Second, Christen recommends checking air pressure often, and topping off regularly. Proper pressure is written on the side of bike tires, he says, but most new riders treat bikes like they would cars, only inflating very rarely if at all. “It’s the most common cause of flats we see,” says Christen, explaining that underinflation leads to trouble when the tire is pinched between the rim and the road. “We see more pinch flats than anything else,” he said. To avoid flats, new riders should “inflate their tires once a week or every other week as needed.”

The third most important mechanical tip is the chain, which can get worn out with time. Christen suggests: “wipe it down or lube it once a month; either way, don’t ignore your chain. Even if you don’t clean it, put some lube on it.”

Finally, Christen notes that most people learned to bike as a kid, but they did not learn everything they needed to know, especially learning to ride in traffic. As adults, they should “seek out information and classes because even adults can learn how to ride a bike better.” This might include any kind of advice, says Christen: “online classes, videos, websites, or talk to someone at a bicycle shop.”

Christen offers a page called “The New Bike Experience” on his shop’s website, which includes another important tip: the most important accessory to go with any bike is a good lock.

James Longhurst, history professor at the University of Wisconsin La Crosse and author of the book Bike Battles: A History of Sharing the American Road, notes that several emergencies in the past have also put Americans back on bikes. “In World War II, gasoline and rubber tire rationing meant that bicycles temporarily replaced many car trips, and after the oil crises of the 1970s, adult bicycling increased.”

Longhurst suggests that, like in WWII, the bicycle that people already own is their best option. “Many families already have an older bike gathering dust in a garage somewhere.” Tim Staton of The Cargo Bike Shop points out that “any bike can be an everyday bike. You don’t need to go out and spend a bunch of money on a new bike. That bike in your garage may in fact be just what you need to get started.” After all, if the point is to avoid paying more at the pump, you don’t want to rush out to buy a new bike before using what you already have. 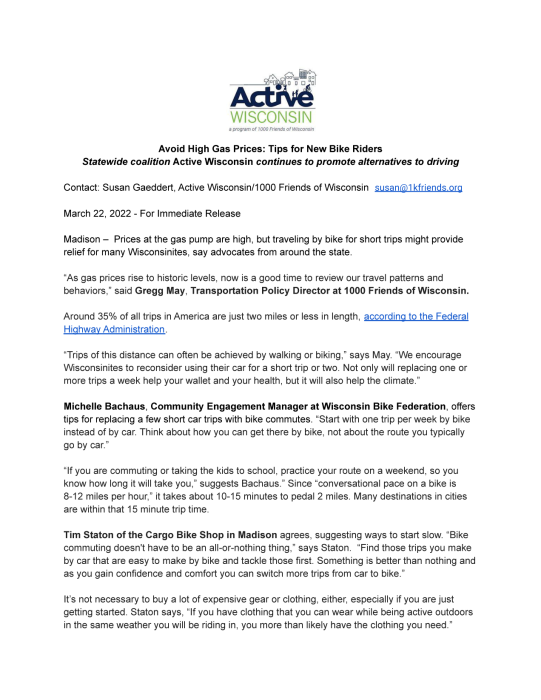