WisDOT uses traffic projections produced by the South East Wisconsin Regional Planning Commission (SEWRPC), which predict a steady half-percent increase in traffic yearly by 2040. WisDOT claims (page 1-23) that approximately 159,000 vehicles use the freeway between Hawley Road and Mitchell Boulevard daily. This is expected by WisDOT to increase to 186,000 vehicles per day by 2040.

However, a separate set of traffic count information provided to our organization by a WisDOT project engineer, showed AADT on the segment between Hawley Road and Mitchell Boulevard was 147,000 vehicles per day – a difference of 11,300 vehicles (Appendix A). This difference alone would take sixteen years to materialize, based on the 0.5% annual growth in traffic WisDOT predicts for the corridor. This data provided separately shows that traffic counts on that stretch of highway have, in fact never reached the level claimed by WisDOT in the DEIS. 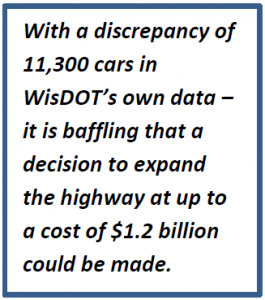 This discrepancy is even more significant when considered along with the volume of cars that WisDOT asserts would need to be taken off the freeway to prevent expansion as Section 2-17 of the DEIS states. “In order to reach a level of service D on I‐94 under the At‐grade alternative with no Hawley Road interchange, at least 4,400 vehicles per day, including 350 cars in the afternoon peak hour, must be diverted off of the freeway and on to adjacent roads”.

With a discrepancy of 11,300 cars in WisDOT’s own data – it is baffling that a decision to expand the highway at up to a cost of $1.2 billion could be made. WisDOT’s own dataset of actual traffic counts contradicts the claimed need for expansion.