With so much information at our fingertips day in and day out, sifting through it for clarity and analysis can be challenging. One of the things we try to do at 1000 Friends of Wisconsin is to shed light on underlying trends and patterns that can help communities make better decisions about design, services, and infrastructure.  This is particularly true in the case of understanding and advocating walkability and bikeability.

We and many others have argued for the personal, community, and environmental health benefits of getting more people out walking and biking. The ultimate test of communities’ efforts to improve walkability and bikeability, though, is whether people are actually walking and biking more.

Enter the U.S. Census. While the decennial census is a broad, bigger-picture count of the nation’s population, the American Community Survey takes a sophisticated survey of a percentage of the public on a number of more detailed issues more frequently. Thanks to the ACS, we can look at numbers relating to employment, commuting, and lifestyle through 1-year, 3-year, and 5-year snapshots of American life. 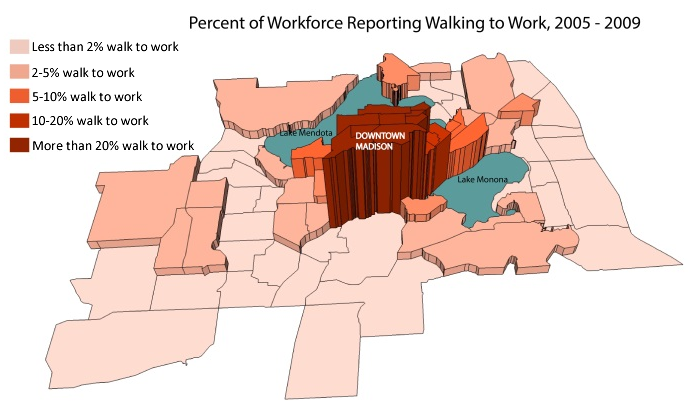 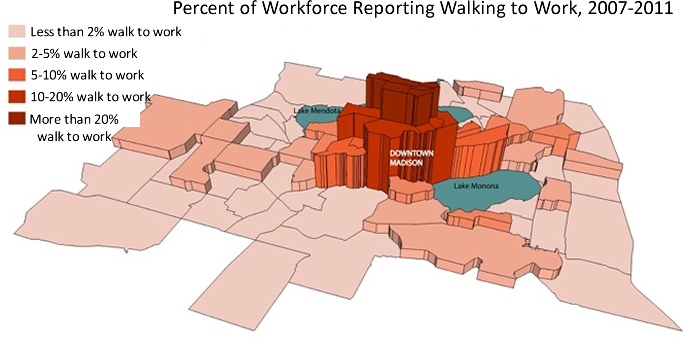 These models show census tracts in Madison, WI by the rate at which people living in those areas walk to work as a percentage of total commuters. They compare the average over the period of 2005 to 2009 with the average over the period from 2007 to 2011. The percentage of residents walking to work decreased slightly in areas of downtown while remaining relatively constant elsewhere. The numbers downtown are still high, but recent changes in demographics may help account for the shift. In particular, the downtown area has seen an influx of young professionals, who often work outside the central city, and retirees, as well as a slight out-migration of college students (who are much more likely to walk to class and to work) from those areas to other parts of the sprawling UW-Madison campus.

We can look at the same set of data to assess how many people as a percentage of total commuters are riding their bikes to work. These data are mapped below, and a couple of important patterns reveal themselves when depicted in this way. First, the number of bike commuters as a percentage of total workers has stayed mostly consistent in the central city, with a few slight redistributions that we believe is largely due to shifting boundaries of census tracts. The larger trend appears to be one of a slight dip in the bike commuting mode share on the far east side of town and a large-scale expansion of bike commuting mode share on the west side. 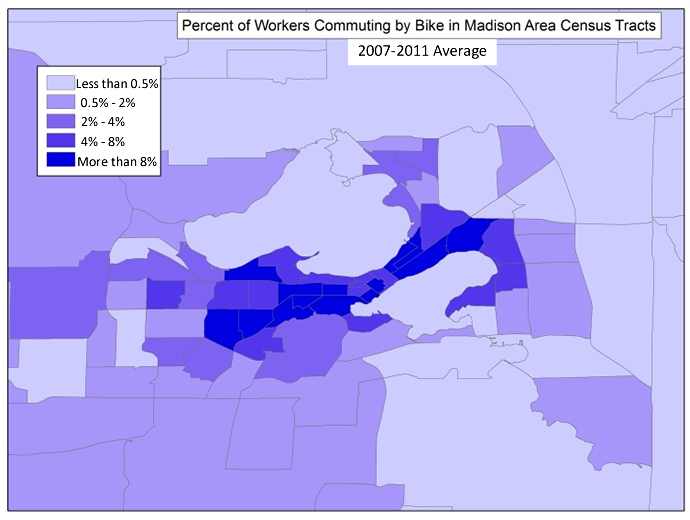 Why is that? Several theories deserve further examination. First, employment growth and urban development has increased more on the western side of the greater Madison metro area. Second, the completion of urban and regional bike paths and trail systems, with multiple crossings over the Beltline Highway, has increased connectivity to these areas, while the east side and especially the north side of town have not seen attendant increases in separated bike paths.  Third, improvements in transit service as well as bike and car sharing have allowed more people to choose multiple modes of transportation throughout the day. One thing is for sure—Madison is among the nation’s leaders in providing better transportation options for people. Despite the metro region’s population growing from 519,000 to more than 576,000 between 2005 and 2011, Madison is one of the nation’s leaders in reducing vehicle miles traveled per person:

While these numbers by themselves can’t answer the tough questions about where to invest as a community, they can help by revealing underlying patterns and giving us the information with which to ask the right questions. Look for more work like this from 1000 Friends of Wisconsin in the near future.