One of the key elements in the Purpose and Need section of the DEIS is a call to “address the obsolete design of the I-94 East – West corridor to improve safety and decrease crashes”. The DEIS mentions the following breakdown of crash types:

The DEIS then explains that rear-end and sideswipe crashes are often indicators of congestion and maintains that the addition of lanes will improve safety on the corridor. The analysis appears to lump all crashes together and simply provides a crash rate that compares the corridor to similar corridors in Wisconsin. The DEIS fails to connect the proposed safety improvements to specific crash types, and only speaks of crashes in vague terms.

In order to objectively verify WisDOT’s findings, 1000 Friends of Wisconsin obtained a crash data set for the corridor from the University of Wisconsin’s Traffic Operations and Safety Laboratory and carried out an independent analysis. Using WisDOT’s own timeframe in the DEIS, we found the following:

It is important to ensure the safety of all users of the freeway. But, It is also important to recognize that not all crashes are equal. Accidents that result in death or severe injury impose a far greater emotional and financial burden on society than those that result simply in minor property damage. A comprehensive crash analysis would make this distinction and identify and prioritize the reduction of fatal and severe injury crashes. Our analysis has shown that rear end and sideswipe crashes that occur during congestion rarely result in severe injury, and have never led to a fatality on the corridor in the time period analyzed. This is in keeping in line with research that shows that congestion is less likely to be associated with severe crashes in urban conditions [19]. An increase in the number of freeway lanes is also correlated with an increase in severe crashes [20]. 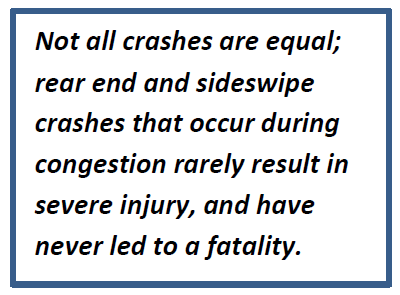 The design issues on the highway that include a combination of left and right hand entrance and exit ramps, as well as closely spaced interchanges do need to be addressed. However, these can be carried out well within the existing footprint of the roadway and at a far lower cost compared to the alternatives provided by WisDOT. USDOT has released guidance that emphasizes the flexibility available in the standard design manual used by state departments of transportation across the county – A Policy on Geometric Design of Highways and Streets (6th Edition). “There are a number of options available to state and local highway agency officials to aid in achieving a balanced road design and to resolve design issues: including maintaining the road’s existing horizontal and vertical cross section and undertake only resurfacing, restoration and rehabilitation (3R) improvements” ( [21]. WisDOT’s plan blatantly appears to ignore these directives.

The crash analysis section of the DEIS makes no mention of WisDOT’s own Strategic Highway Safety Plan – that aims to significantly reduce fatalities and serious injuries on all public roads. The top issue areas identified by the plan are: 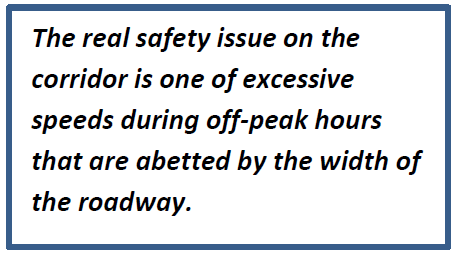 The plan mentions the following “Nationally, speeding, driving under the influence of alcohol or drugs, failing to yield, and running red lights contribute to approximately 93 percent of traffic crashes. In 57 percent of these crashes, driver behavior is the sole reason for the crash. In Wisconsin, the consequences of poor driver behavior are also documented.”

Our analysis corroborates the Strategic Highway Safety Plan’s findings and identified that the real safety issue on the corridor is one of excessive speeds during off-peak hours that are abetted by the width of the roadway. Driving under the influence of alcohol is also an important factor in crashes on the corridor. We conclude that the alternatives proposed by WisDOT do not adequately address safety issues on the corridor and could in fact worsen the problem.