The Governor’s latest transportation budget for the upcoming biennium includes approximately $1 billion in bonding revenue, allocated mostly for the expansion and reconstruction of our highway system. This is a 46% increase in borrowing from the previous budget. Debt service is steadily becoming a larger proportion of the total budget each year, with nearly $450 million allocated in 2013. 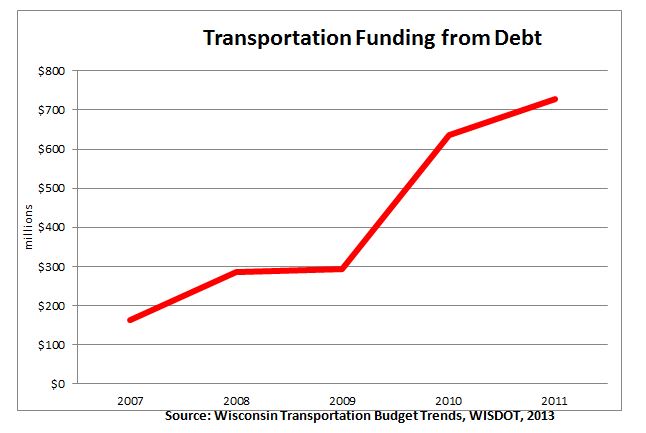 Why is this happening?
The state gas-tax has remained unchanged for over six years – and has not even been indexed to the rate of inflation. This means that every dollar that comes in to the transportation fund from the gas-tax is less valuable than the year before if the rate of inflation has increased in the same period of time. In addition, as cars become more fuel-efficient, they use less gasoline and in turn contribute less money to the fund. From these statistics, clearly the state is unable to finance the expansion, operation and maintenance of our transportation system through conventional revenue sources like the gas-tax and vehicle registration fees anymore. The image below shows the growing breach between incoming revenues and transportation spending, which the state is making up through increased bonding and transfers from the general fund. 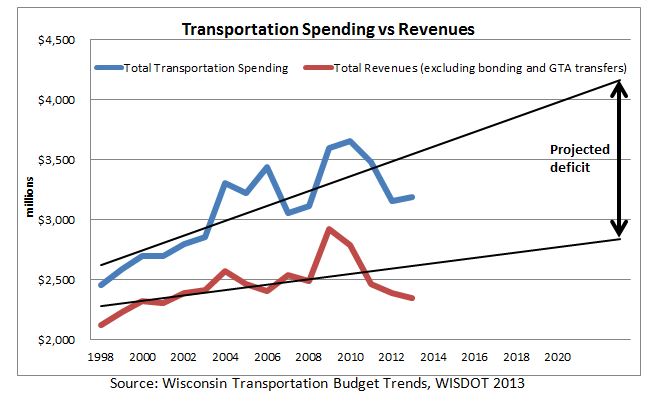 Unfortunately, the state continues to expand and increase capacity on the highway network, while demographic information shows that Americans are driving less each year. These highways are likely to be underused, while adding millions of dollars to the state transportation budget in maintenance costs. A recent report by the Wisconsin Public Interest Research Group showed that several highways in Wisconsin have failed to meet their traffic projections. In spite of this, the state plans to spend over $700 million on major highway projects this year, in addition to preliminary studies for several new highways being given the go-ahead in the coming years. Inexplicably, the state also fails to take into account the life-cycle management costs of new highways during their planning and design stages – this is analogous to buying a car without budgeting for its gas and maintenance costs. With falling gas-tax revenues Wisconsin will be forced to borrow more to cover these costs creating a draining cycle of economic loss.

What does this mean for taxpayers?
The taxpayers of the state will be stuck with the bill for these infrastructure projects that they did not ask for. To prevent the fund from going bankrupt, the state will have to increase the gas-tax substantially in the near future. In addition, local governments across the state will be forced to increase local and property taxes to help pay for the maintenance of their road networks and transit systems.

What can we do about it?
It is imperative that we slow this gap between spending and revenues – through creating a balanced transportation system in the state. When WisDOT public input for its highway projects – one of the options is a “no-build” choice. However, more often than not, the no-build option is simply a formality and one that is barely considered in making transportation investment decisions. We must ensure that every new project that is approved is warranted and free from wasteful additional spending. These changing times indicate that the public has tired of reckless investments in large concrete corridors and instead support compact development which prioritizes accessibility over automobile mobility. Investments in transit, bike and pedestrian infrastructure have far higher rates of return than in highways. These spur economic development faster, in addition to reducing carbon emissions. We urge you to be active in these discussions and communicate your desire for creating healthy and livable communities to your local legislator.