The State of Wisconsin spends billions of dollars annually maintaining and expanding its transportation system. Here is a primer on where that money comes from and how it is spent – and why WisDOT’s budget needs to change…

Every one of us uses some form of transportation every day. But how often do we pay attention to what goes on behind the scenes, while we go to work, shop or play? A healthy transportation network is the cornerstone of a vibrant economy as it brings communities together, allows for the free exchange of goods and services and generates valuable income for the state.

Wisconsin’s transportation network consists of roads and highways, public transit, airports, harbors, railroads and bicycle/pedestrian facilities. Most of these facilities come fully or partially under the purview of the Wisconsin Department of Transportation. Focusing mostly on highways, the department plans, builds and maintains the state highway system and the interstate network. It also supports the costs of building and operating local and county transportation systems which include highways, transit and other modes. In addition, WisDOT plans and financially supports statewide air, rail and water transportation.

The lion’s share of WisDOT’s revenues comes from the state motor fuel tax and vehicle registration fees, federal funds and debt. In 2012, the department of transportation had revenues of $3 billion, with the majority of funding coming from the state gas-tax, vehicle registration fees, bonds and federal grants.
Federal highway programs are funded from the Highway Account of the Highway Trust Fund. The fund consists of revenues from federal motor fuel taxes and transportation related excise laws. The Federal Highway Administration distributes highway funds to the states based on funding formulas defined by the federal surface transportation funding authorization. Federal funds for mass transit come from the Mass Transit Account of the Highway Trust Fund and from Federal General Fund Revenues which consist of revenues from federal motor fuel taxes as well. 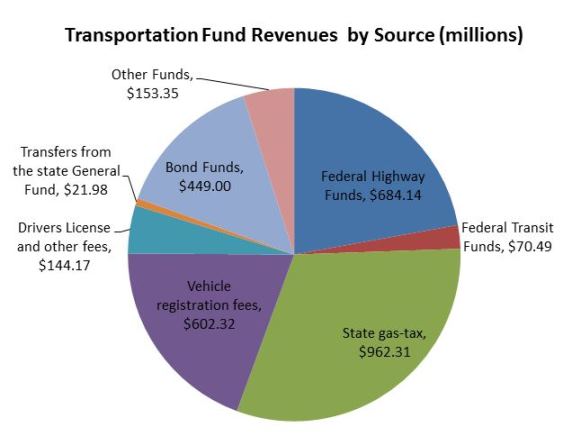 Wisconsin spends a disproportionate amount of its budget and resources on highways, at the expense of other modes of transportation. Each near, nearly $2 billion is spent on the highway system, with close to $600 million being spent on highway expansion alone in 2012. The remainder of roadway funds is spent on rehabilitation, highway operations and local road assistance. The department provides capital and operating assistance to transit systems across the state although it does not actively play a role in running them – this is left to individual communities. Over the years, funding for highways has steadily increased, while that for transit and local communities have been cut.

This single-minded focus on highways has led to a severely unbalanced transportation system which is not accessible to many groups of people. Due to cuts in transit funding, many bus-routes have been eliminated leaving thousands with no access to jobs, shopping, school, medical appointments and recreation. In addition, expanded highways have caused urban sprawl, habitat loss and increased global warming carbon emissions. Local communities have not been receiving the funding they are entitled to from the gas tax, leaving local roads in states of disrepair. 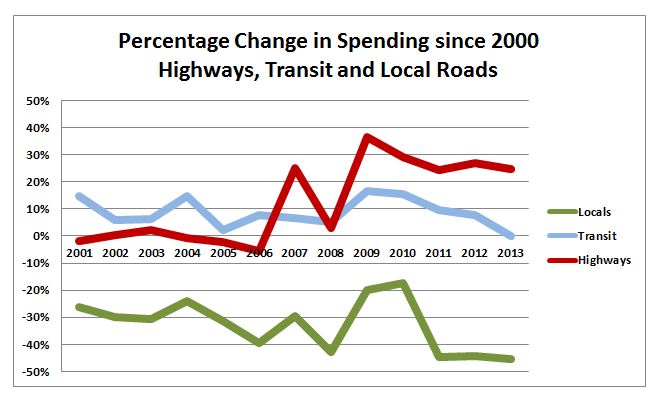 The Transportation Fund is currently besieged with problems. With the gas-tax remaining constant and people driving more efficient cars, less money is coming in to the fund each year. The state has tried to respond to the problem by increasing borrowing and by raiding the General Fund. However, these are not sustainable solutions. A report by a Governor appointed transportation commission recommended raising the gas-tax, as well as implementing a mileage based fee to more fairly capture the value of using Wisconsin’s highways. With data from across the country showing that people are driving less, living closer to places of work and recreation, and increasingly using public transit – increasing investment in unnecessary highways is counterproductive. We are currently borrowing money to build large highway infrastructure creating a cycle of maintenance and operating costs for roads that people are unlikely to use. 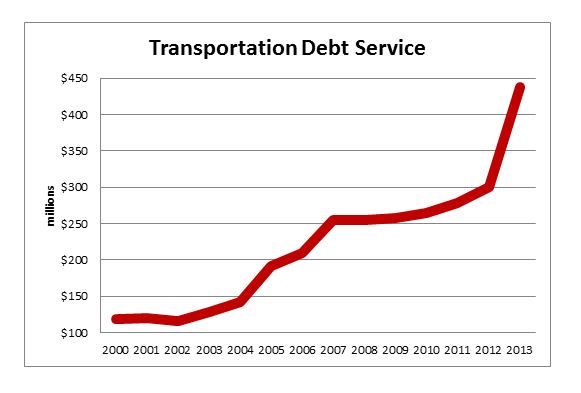 Studies have shown that investing in public transit has a higher rate of return than investing in roads, with increased job creation, reduced crash rates and better air quality being some of its benefits. In addition, providing bicycle and pedestrian infrastructure has been proven to increase traffic to local businesses, and encourages the return of money to communities around the state.

Wisconsin needs a balanced transportation system which focuses on accessibility instead of purely highway mobility. We must recognize that rail, transit, biking and walking are legitimate transportation modes which use less space, pollute less and carry passengers in a more efficient manner than automobiles do. Join 1000 Friends’ efforts to bring balance to our transportation system and check out our other transportation related materials on our website.