For great Placemaking idea #3 we’ll take a walk.  To walk through the Library and State Street Malls is to experience history. As the primary nexus of activity on the east end of campus and the gateway between the university and Madison’s downtown, this area is rife with historical significance. Renovations and updates to such spaces are always a balancing act between respecting and honoring history and meeting the needs of current and future users. 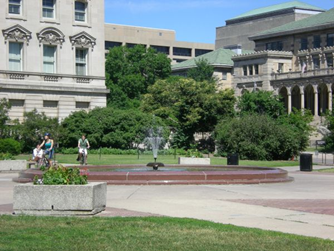 The fountain in the middle of Library Mall (right), a generous gift from William Hagenah in 1958, has enjoyed a long run as the focal point of Library Mall. Unfortunately, it has also been a problematic feature of the Mall since its construction. Over the years, maintenance and other mechanical issues have plagued its operation. The spray pattern of the Library Mall water fountain and water conservation issues are also long-standing problems. During the past thirty years, the fountain has been turned off, under construction, or simply not working for long periods of time (including for the last four years). The Library Mall fountain should be replaced or significantly modified by a new water feature that gives all visitors a way to interact with the space. We argue that Mr. Hagenah’s legacy is best honored with the construction of a well-functioning contemporary water feature that takes this treasured public space into a new era.

One of the signature principles of Placemaking, as described by the Project for Public Spaces, is the Power of Ten—every great public place should offer at least ten things to do or ten reasons to be there. Fountains and water features can offer at least a couple things to do or experience: people watching, perhaps, or enjoying the sound or even the spray on a hot day. When operational, the current Library Mall fountain has helped people cool off for decades. As we contemplate a redesign of the space, however, why not upgrade to an interactive water feature that offers something for everyone, day or night? 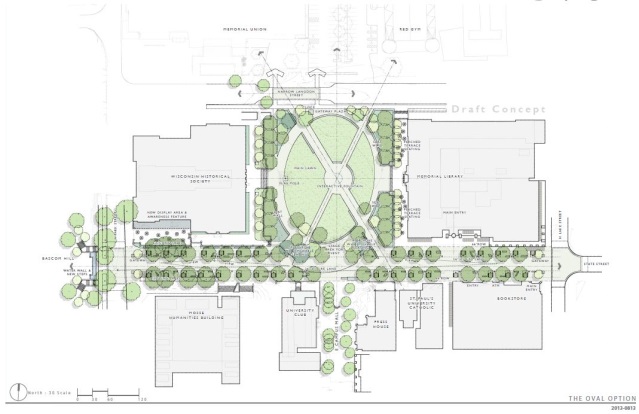 We propose that the consultant’s Oval design (above) should include replacement of the current fountain with a surface water feature which incorporates lighting and programmed surface water jets. The consultant’s Great Lawn design (below) contemplates removal of the existing fountain and replacement with a waterfall feature located along the Memorial Library. This design should allow direct interaction with the water and should also be lit. Either water feature – a surface water jets and lighted fountain or a waterfall – would accommodate both summer uses and a winter ice skating rink on the Library Mall. The surface jet and lighted water feature also allows incorporation of historic and cultural art into the surface tiles which should highlight the cultural and historic significance of this great public space. 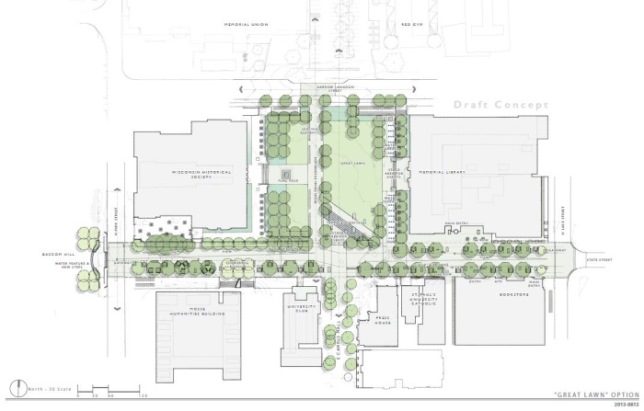 Why are these considerations important? First, having a water feature with good lighting fulfills a crucial safety consideration, particularly for families, and allows use of the fountain past dark. One of the common problems with the project area as pointed out by visitors during the public comment period earlier this year is the utter lack of adequate lighting at night. Current designs call for rectifying the overhead lighting situation, but a lighted fountain would contribute positively to that aspect of the space as well as offering a safe and fun destination for families on lower State Street. 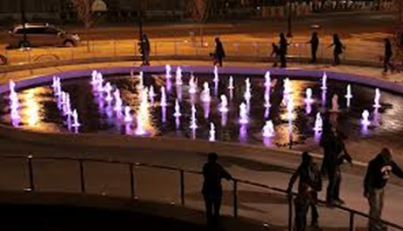 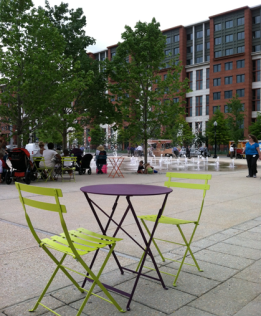 Second, interactive water features (like splash parks, wading waterfalls, and programmed jets) are an increasingly popular and effective placemaking technique in US cities and would likely offer a great deal of bang for the buck. For example, Canal Park’s interactive water fountain with programmable water jets is embedded below the paving surface anchors on the southern end of the park. This fountain is an example of a water feature that could be combined with our recommendations for a surface-flooded ice rink and an increase in tables and chairs. During the spring, summer and fall in Canal Park, the ice skating feature (above) is removed and returns to a public gathering place with tables and chairs and umbrellas (below) where people can sit and enjoy the splash pad from afar. This flexibility makes Canal Park a destination year-round and offers multiple reasons to be there, fulfilling a litany of placemaking objectives that could be achieved here at Library Mall. 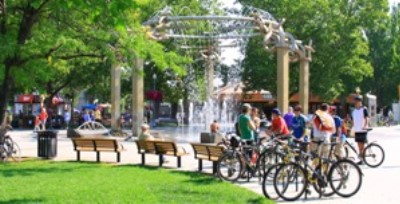 Other communities have used interactive splash parks in prominent urban squares to great effect, including (top to bottom) Portland, OR, Spokane, WA, and Provo, UT. 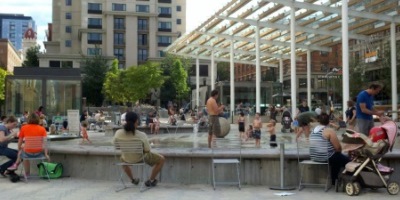 Madison is already home to the Cypress Splash Park and a splash pad at the Goodman Community Pool, and it plans to open at least one new interactive water feature in the next two years. We believe it’s time to add one at Library Mall. 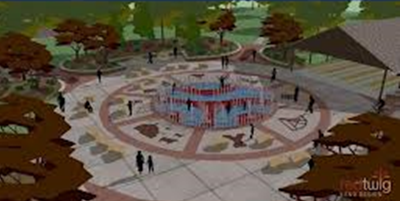 Click here for more information and to read about Idea 1 and Idea 2.