We have been taking a closer look at the proposal from the Madison Design Professionals Workgroup to put commuter traffic on US Highway 151 underground through part of Downtown Madison, cap the tunnel with a new 6.5 acre park, and improve the surface street grid for local pedestrian, bicycle, mass transit, and local vehicle traffic.

Last week, we examined some of the myriad benefits a project like this would likely have. Today, we will take a look at some of the potential downsides and side effects the project may produce.

1.   Management and Operations – Every park and tunnel in every community faces ongoing challenges with regards to management and operations. In some ways, management of the expanded Law Park would depend to a large extent on the vision the community decides upon for the park. Some urban parks, like Millennium Park in Chicago, feature impressive landscaping, a variety of architectural and cultural attractions, and large public gathering places. Some, like Madison’s Brittingham Park, are comparatively much less complicated, generally featuring large grassy areas, some low-impact landscaping like community gardens and rain gardens, and perhaps a park shelter. Among the chief management and operations concerns for an expanded Law Park would be dealing with homeless use, running programming and events, and general cleanliness and tidiness—common and ongoing issues in any urban park. That said, as a centerpiece urban park with this high of a price tag, this project would face heightened public scrutiny and standards.

The City of Seattle commissioned a study of its parks system, which faces the familiar challenge of a backlog of needed maintenance amid ever-expanding demands of residents for more and better parks. That study identified several strategies that can be used to provide ongoing financial support for operations, maintenance, and programming:

2.   Water Table – John Nolen Drive sits a few dozen feet from Lake Monona and is higher by only 3 feet. The water table is quite high and the soil beneath is mostly fill, increasing the level of difficulty in constructing a tunnel. This is an engineering problem that can be met with a variety of designs and solutions, cost being the primary factor.

3.   Parking – depending on the treatment of some of the local streets during the redesign that would accompany this change, certain businesses might see significant changes to their parking layout and access. This may include an addition of on-street parking on Williamson Street and East Wilson Street but also a loss of parking in Law Park and a potential loss or constriction of access to parking on either side of the proposed park (A and B, on map below). The Design Professionals’ proposal keeps the parking lot behind Machinery Row (C on map) and covers it with a green deck as well. This would keep a large number of parking spaces for those concerned about vehicle access but would cost considerably more due to the lot’s location on private land. It also does not address the increased difficulty of reaching the lot from US 151, which would not have entrances or exits at Williamson Street. Access to Lot A could be maintained in the long tunnel option by a) reestablishing a Blair Street surface extension to the lot, or by b) reopening the western driveway onto S Franklin St. In the short tunnel option, the intersection with Railroad Street could become the primary entry point for this lot. Neither lot A nor C needs to be eliminated completely, but changing configurations and/or covering lots comes with attendant costs. 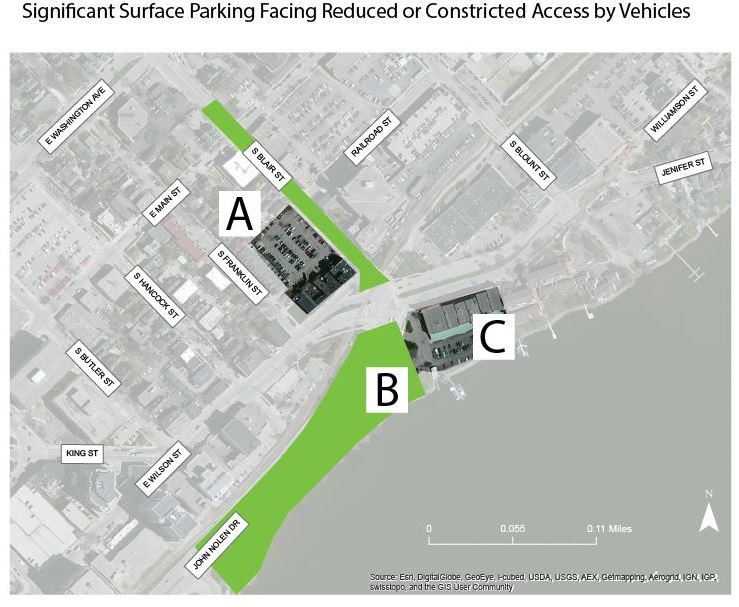 All told, this project could result in the loss of between 123 and 334 off-street parking spots in or near the project area (depending on if lots A, B, and C are eliminated or reduced). However, it would also open up new opportunities for on-street and structured parking that would retain (or possibly exceed) current parking supply while lowering the supply of parking in surface lots, a change that is desirable under the city’s long-term plans. For example, the Design Professionals proposal involves structured parking at the Intermodal Transit Center numbering around 300 spaces. Public parking structures with hundreds of spaces can be found nearby, generally within a half-mile. All in all, it is likely that parking issues with this project are likely to be political rather than technical and will hinge considerably on the perceptions of customers, business owners, and residents.

4.   Access to Highway 151, Williamson Street, and downtown – This project would remove some local access points to and from the busy federal highway by design. In order to maintain the draw of the Williamson Street corridor and access to parts of the downtown, other interventions might be necessary, including making Wilson Street into a two-way street, upgrading the capacities of other surface streets, and improving infrastructure and level of service for other forms of transportation. As the map on the next page demonstrates, under current numbers, traffic volumes on some of the other surface streets, especially Blount, Livingston, and Paterson, could more than double as drivers try to find their way to Williamson Street from the highway. The addition of additional multistory residential development as proposed on Williamson Street would only exacerbate this problem.

An additional challenge concerning street network access is how to reap the benefits of the urban street grid for distributing vehicle traffic without causing unwanted congestion on the residential streets that abut the corridor in the historic First Settlement neighborhood and in the South Capitol district. Current configuration on Wilson Street is one way, and residents have expressed a strong desire to keep it that way. However, this project could result in congestion throughout the downtown if Wilson Street does not become two-way, especially in the residential parts of downtown that have an interest in keeping business and entertainment traffic off their streets.

The map (below) shows some impacts to local and through traffic if demand is not managed appropriately and if changes and upgrades to alternative transportation infrastructure are not made. 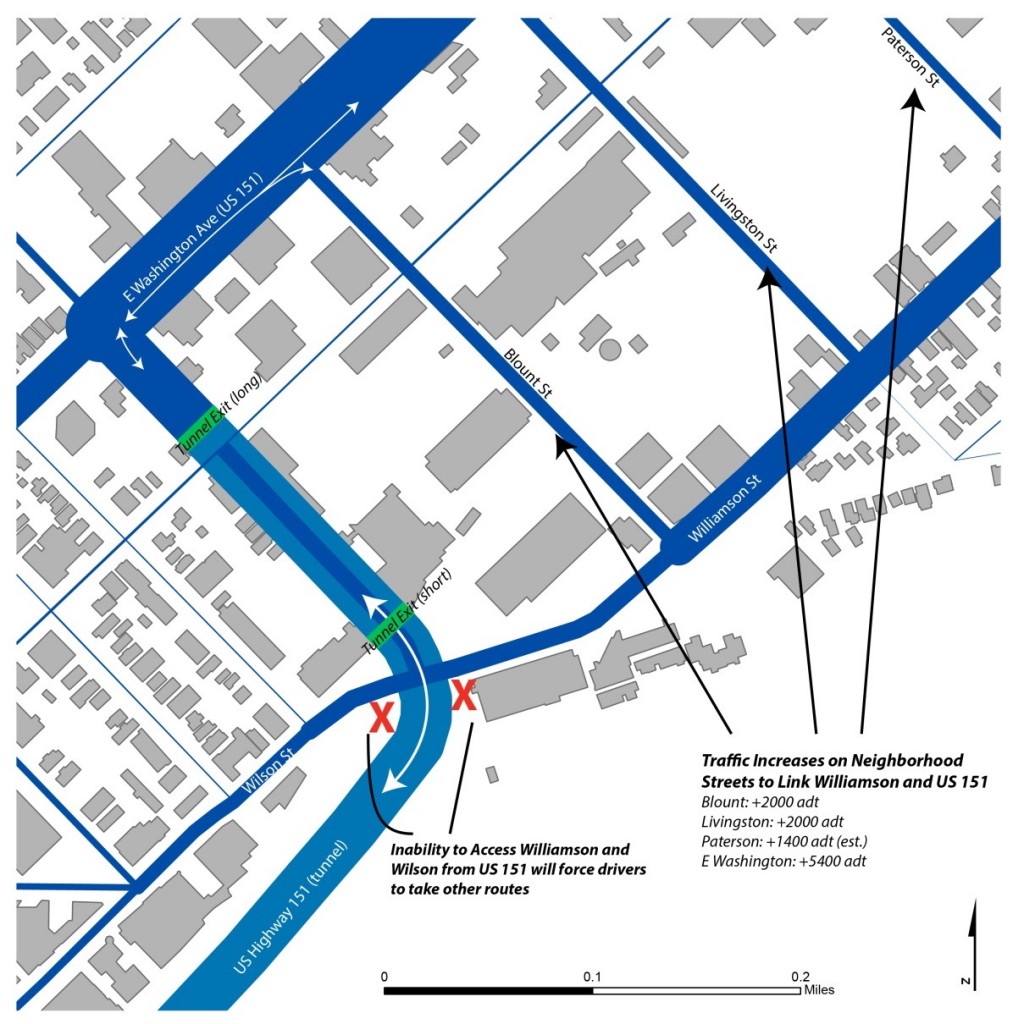 This map (below), however, shows some of the proposed transit, pedestrian/bike, and vehicle parking solutions that could help reduce the overall vehicle pressure on both local roads and the federal highway. This is both a challenge and an opportunity; after all, tackling many complex problems at once is challenging for any community, but a visionary and transformative project like this one will not work to its true potential unless the community addresses these related issues. 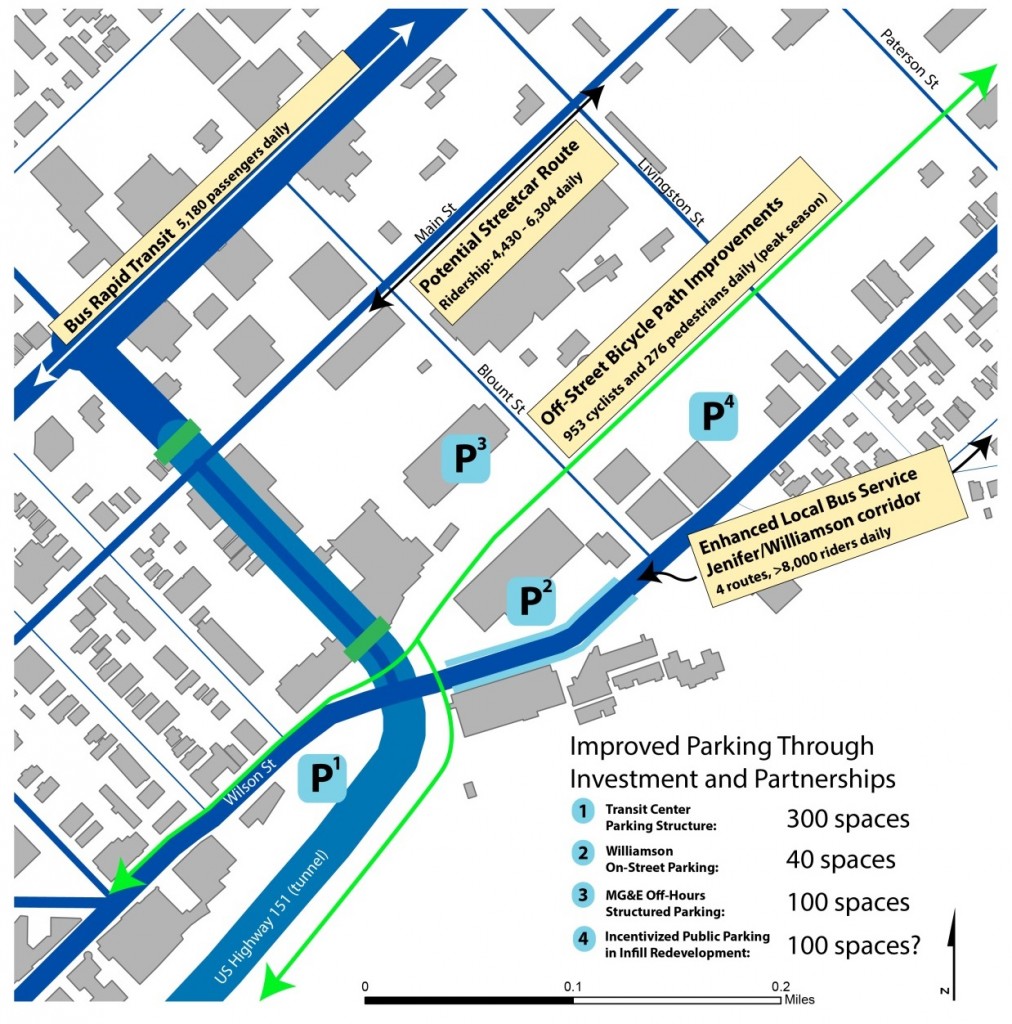 What do you think? Should Madison pursue this project? Do the benefits outweigh the potential risks?  Is this the transformational project that will create better transportation and better neighborhoods in the Downtown and East Side of Madison? Is there another vision out there that hasn’t been discussed yet? This community conversation is just beginning, and we are happy to be a part of it.

–Matt Covert is the Green Downtown Program Manager for 1000 Friends of WisconsinRead his paper about decking over John Nolen Drive in Madison.